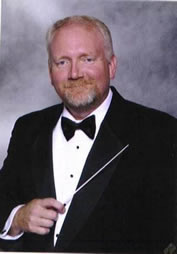 Mark Provost, Band Director at Oconee County High School, received his Bachelor of Music degree at the University of Georgia and his Masters Degree in Music at Georgia State University. Before coming to Oconee, Mr. Provost taught at Tattnall Square Academy and Griffin High School. He enjoys spending time with his family, his pets and cheering on his Georgia Bulldogs. He and his wife Laura have one son, Andrew, and two daughters, Katie Grace and Abigail. They also have several dogs, cats and horses. In his spare time, he likes to travel, ride his horses, play golf, and relax.

In 2007 the OCHS Symphonic Band was honored with an invitation to perform for the Georgia Music Educators Association’s annual convention in Savannah, GA. This was a tremendous honor for the band as only three bands from the state of Georgia were selected to perform! 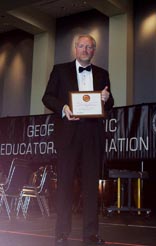 Mr. Provost has been presented the National Band Association’s Citation of Excellence on three occasions since coming to OCHS. Pictured here in 2003, once in 2007 and again in 2011.

The National Band Association is the largest professional organization for bands in the world. Its singular purpose is “to promote the musical and educational signficance of bands.” The Citation of Excellence is awarded to directors “for outstanding contribution to bands and band music through professional leadership and record of service.” Recipients are recommended by a member of the National Band Association and then approved first by the state chair, the national awards chairperson and then the president before the award is presented. 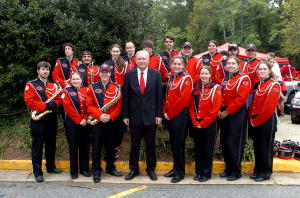 Redcoat for a day

Mark Provost, a 1991 graduate of UGA and a former Redcoat, was invited to guest-conduct the Redcoats on the National Anthem for the UGA-UT game on October 9, 2004. His comment about the experience was: “It was a tremendous honor to be invited and was thrilling to direct the Redcoats in front of 90,000 spectators.”